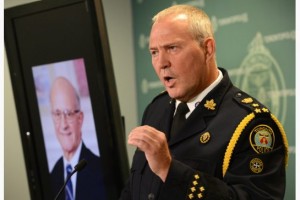 On July 27th, 2013, Sammy Yatim was shot and killed by James Forcillo, a Toronto police officer following an altercation on a TTC street car. In the wake of this tragedy, Chief Bill Blair engaged former Supreme Court Justice, Frank Iacobucci to conduct an independent review of the use of lethal force by the Toronto Police Service.

The Criminal Lawyers Association was among a select group of organizations invited to make submissions to Justice Iacobucci on the following topics:

The CLA’s submissions were the product of countless hours of effort on the part of Anita Szigeti, Breese Davies, Sean Robichaud, Simon Borys and many others.

Jusitce Iacobucci’s final report can be found here which includes 84 recommendations which spell out changes in training and equipping of police to better deal with people in crisis.

The Criminal Lawyers Association submissions to the Independent Review can be found below.

CLA Submissions on TPS Use of Force 2014

toronto police use of force

For criminal lawyers, the words “second opinion” continue to be tainted with the ignoble practice of scooping. They deserve more respect, as there can be significant benefits to both clients and lawyers. When approached, here are a few simple guidelines that help separate the “sage” from the “scooper”:

With the proper exercise of professional judgment, second opinions can and should be a healthy part of your practice. When the opportunity arises, don’t hesitate.

Craig Penney is a criminal defence lawyer practicing in the greater Toronto area since 1994.
http://craigpenney.com

While the shocking events that took place on Friday at the William Davis Courthouse are still fresh in our minds we wished to take this opportunity to express our deep thanks, appreciation and gratitude to all members of the Peel Regional Police Service for keeping our courthouses safe.

We especially want to acknowledge and thank Constable Mike Klarenbeek who selflessly risked his own life on Friday, no one knows what could have occurred but for his heroic efforts.

Our justice system consists of multiple stakeholders who all have vital roles to play. Our system works best when we honour and respect all participants equally.

The Criminal Lawyers’ Association (“CLA”) and the LAO Lawyers have signed a landmark Criminal Justice Protocol Agreement “CJPA” at Queen’s Park on December 11, 2013.

The agreement arises from, and is designed to avert the growing crisis in the administration of criminal justice in Ontario arising from LAO’s modernization efforts. The agreement contains key commitments rooted in professionalism arising from a mutual recognition of our aligned interests by virtually all lawyers that provide criminal justice services in Ontario. Under this agreement, we are stronger together in advocating on behalf of the indigent accused for increased capacity and resources to address the inequalities within the criminal justice system resulting from chronic under-funding and policy implementation that impedes the ability of accused to access quality legal representation.

END_OF_DOCUMENT_TOKEN_TO_BE_REPLACED

Recently the Toronto Star posted an article on a new mental health strategy announced by Legal Aid Ontario. This is our Association’s response:

Legal Aid’s sudden commitment to improving the level and quality of legal services it provides to the mentally ill is encouraging, but sadly long overdue, and, ultimately, flawed.

The Criminal Lawyers’ Association membership, which is made up of over 1000 private defence counsel, many of whom take Legal Aid files, sees this announcement as window dressing to hide the grossly underfunded resources that are required to actually address the legal problems of the mentally ill on the ground.